It seems that people are at last coming around to the idea that humans are the main cause of climate change and the we need to change our lifestyles to cut our carbon emissions. And FAST. So it would seem a bit contrary and counter-productive to suggest that we’re aiming at the wrong target - and believe me, I have procrastinated over writing this piece for a long time.  I don’t mean, should it be methane or CO2. I mean, when it comes to calling out the single biggest greenhouse gas that is forcing climate change, methane and CO2 are bit players. That’s not to say we shouldn’t be doing our best to control our carbon emissions. We certainly should, as every little bit is going to be needed. But when we look at the relative impact of the various greenhouse gasses, there is one which never gets mentioned yet is FOUR TIMES as powerful as all the rest PUT TOGETHER.

This is WATER VAPOUR, the gas form of water. It is in our atmosphere and the air we breathe. As global temperatures rise, so the concentration of water vapour in our atmosphere likewise increases in what is known as a positive feed-back loop, making the problem even worse.

Like me, I’d guess you are a little bit puzzled. Why, if water vapour is the single biggest greenhouse gas, are we not trying to do something about it? Well the reason is quite simple - there’s nothing we can do about it, so, forget it? To date that has been the attitude of many scientists and politicians but others argue, though are not yet heard, that this could be the most fruitful, practical and least damaging approach to successfully tackling climate change.

Here’s the thinking. It goes back to a couple of scientists (and probably many others that I haven’t heard of) operating independently and separately on two continents 40 years, or so, ago. One was a vegetarian botanist called Alan Savoury working in Zimbabwe, Africa. His mission was to rebuild biodiverse grasslands out of areas of the country that had become arid or semi-desert. His first move was to clear out the cattle because they were being blamed for damaging the vegetation. To his amazement and great disappointment, things actually got worse. To cut a long story short he realised that, as is so often the case, nature provided the solution.

He found that through careful, controlled management of the grazing cattle, he could replicate the grazing actions of the vast herds of wildebeest, antelope, gazelle, zebra, etc. that had roamed the grasslands of Africa before humans came along and messed it all up. The positive impact on the soils and biodiversity in just a few years was so dramatic that no one, other than those who had seen the evidence first hand, believed him. So he set up his own institute as a base to develop the system and spread the word, through Africa, Australasia, the Americas and finally Europe.

In Australia another scientist, Walter Jehne, was studying soils and their relationship to climate. Not something we immediately associate as being particularly connected, but they are! He, like Savoury, recognised the importance of understanding how nature works, creating soil through the actions of soil microbes on rocks. How they work together to build up a spongy material that separates the grains of rock and allows air and water to be trapped in the soil creating the ideal conditions for other microbes, worms, insects and all the other creatures of the soil to proliferate. It also allowed plants to grow and send down roots deep into the soil where they feed the micro-organisms their spare sugars in return for other nutrients. Mind blowing stuff. Above ground, on the hugely extensive grasslands, were these vast herds of ruminants, recycling that herbage. That grazing and trampling action, as millions of animals moved across these plains, recycling the nutrients and breaking up and incorporating this organic material into the soils was a critical part of the soil-building process.

These healthy soils impact on the climate in two significant ways. Firstly they lock up carbon which is an intrinsic element of soil humus, insect and plant root life. They also trap water and air, reducing water run-off and soil erosion. Secondly, and this is a critical part of this argument, a healthy soil with a good cover of plants – grasses, herbs or trees – never gets above 20 degrees C. That’s a fact and it’s due to the biological processes that are going on in the plants that absorb the sun’s energy. A bare piece of ground, however, can get hot enough to burn your feet or fry an egg. In terms of the greenhouse effect and climate change, this is critical.

The reason it’s called the greenhouse effect is because, like a greenhouse, the earth’s atmosphere acts like the glass. It allows the sun’s rays to enter but traps a lot of it as it bounces off the various surfaces in the greenhouse. The more bare surface there is, the more that energy tries to bounce off the surface and escape . Where there are plant surfaces, much of that energy is captured by the plants and used to produce plant food (for the plants and for their roots to feed the microbes and create healthy soil). The difference in the amount of heat radiation bouncing off bare versus plant covered surfaces can be as much as 100%.

This is where the greenhouse gasses come in, because they trap a lot of that re-radiated energy. So if we take the sun’s total energy that enters our atmosphere and remove the bit that is captured by the plants, then ideally we want the rest to escape. If it doesn’t, we start to heat up. Of course I’ve hugely simplified a horribly complex set of processes that interact with each other, but you get the general idea?

Now this is where the clever stuff that Savoury and Jehne discovered becomes critical. Sure, we can’t control the amount of water vapour in the atmosphere because that comes off our vast oceans, lakes, etc, but we can (and have over centuries!) affect the amount of bare ground on our planet. Our deforestation, overgrazing, over cultivation, over irrigation, and more recently over fertilisation and over use of pesticides, has been going on for centuries. We have been mis-managing our soils and decimating the herds of herbivores that have been a critical part of the balanced ecosystems of our planet. This has created huge areas of arid lands and desert where previously there was a healthy, biodiverse population of plants and animals. These arid lands and deserts are still expanding. Every year they re-radiate increasing amounts of the sun’s energy into the atmosphere where the increasing amounts of CO2, methane, water vapour and the rest trap increasing amounts of heat energy causing our earth to heat up.

BUT THERE IS A SOLUTION.

If we rebuild our degraded soils through careful herbivore management to recreate those natural conditions before we came along, we can re-populate them with plant life that will capture the sun’s energy to produce food and a healthy, resilient, biodiverse land ecology. By this action, we can reverse the damage we’ve caused to our soils and wildlife, reduce the CO2 in the atmosphere, reduce both the amount of bare land on the planet and the heat energy re-radiated and thereby the amount of sun’s energy trapped by our atmosphere, which together will address the catastrophic potential of climate change. This solution delivers a heap of benefits for us and the planet at little cost or risk. It can be done but we must start NOW!!

*Pasture Management, Soil, Organic Carbon & Biodiversity is one of the panels at the Ethical Farming Conference taking place at The Ethical Dairy on 16th May. You can find out more about the programme and how to book here: www.ethicalfarming.org 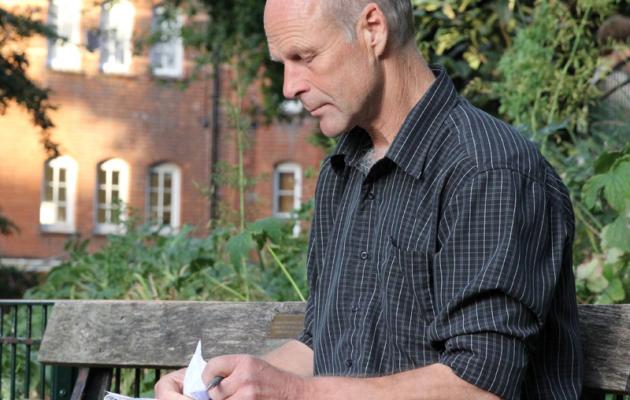 David Finlay is the farmer behind The Ethical Dairy, pioneering cow with calf dairy farming at scale combined with an ecological farming approach and a focus on circular systems, biodiversity and sustainability.