Is it time for kinder dairy farming?

We formally launched The Ethical Dairy this week and we’ve been thrilled with the response.  The support and encouragement from members of the public, organisations, elected representatives and indeed from other farmers has been heartening, and the comments we’ve received about our new approach to dairy farming has been overwhelmingly positive.

We will be organising some information events soon that will go into the background of our approach in a bit more detail, but in the meantime you can read our press release below: 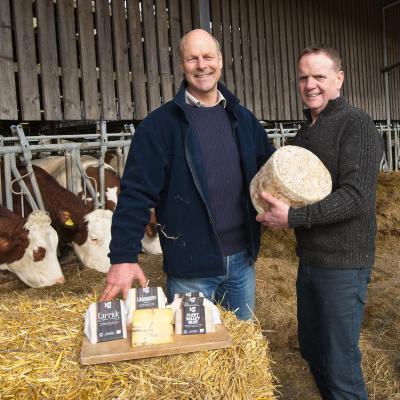 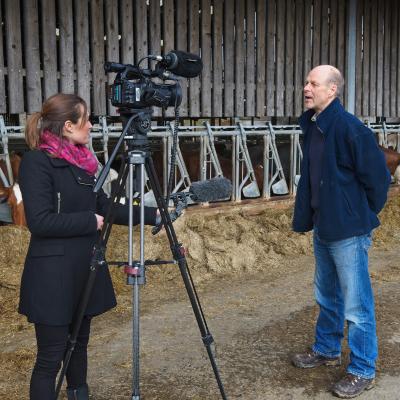 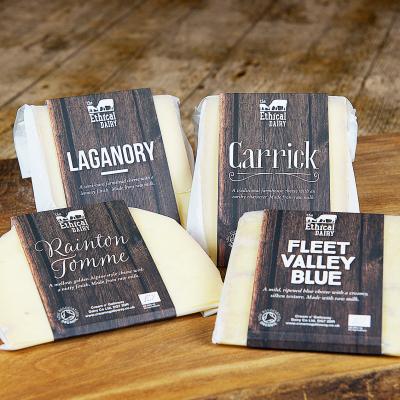 ‘With livestock farming becoming more and more intensive, is it time to rethink how we run dairy farms?’

For organic dairy farmer David Finlay that was the question that refused to go away.  Nearly a decade after starting their journey to find a ‘new’ approach to dairying, David and Wilma Finlay today launch The Ethical Dairy; their answer to the public’s increasing criticisms of the dairy farming industry.

Their solution?  Cow with Calf dairy farming - keeping the calves with their mums to suckle, and taking less milk as a result.  David Finlay explained:

“What we’re doing is de-intensifying dairy farming.  It’s almost the opposite of what’s happening elsewhere in the industry.  By branding ourselves The Ethical Dairy we are not demonising farmers nor claiming to be perfect.  What we’re trying to convey is that in everything we do we aim to meet the highest ethical standards.

“Our goal was to farm in a way that is resilient, ecologically sound and less stressful for the animals and the people working with them.  So we’re leaving the calves with their mothers to suckle.  It means we take less milk from each cow but we’re seeing real benefits from this approach - longer living, healthier cows, less antibiotic use, faster growing calves and less purchased feed.”

“In traditional dairy farms calves are removed from their mothers within a few hours of their birth.  Having married into farming rather than grown up with it, the stress this places on the cow was always very obvious to me and I was never comfortable with it.  So we wanted to find a way to keep calves with the cows and still have a financially viable farm.  We don’t want to have to choose between doing what’s right and staying in business.”

The surge in interest in veganism, with campaigns like Veganuary becoming headline news, may be recent but planning for the Finlay’s ‘revolution in dairy farming’ began a long time ago.  Customers of their award winning business, Cream o’ Galloway, a luxury ice cream brand and family visitor centre, have had ringside seats with regular farm tours and information events explaining their change in approach.

Transitioning a family farm to this new model has been a long and expensive journey.  It’s involved building a brand new dairy that can comfortably house the growing calves alongside their mums.  When an initial trial run in 2012 failed due to management and financial pressures there was no shortage of helpful comments from their dairy farming friends, neighbours and relatives!

Dumfries & Galloway, where the Finlay’s farm, is home to 45% of Scotland’s dairy industry, so introducing a radically different dairy model in the heart of one of the UK’s biggest dairy regions has not been without challenge.  David added:

“Many people in the farming industry think we’re completely crazy.  Financially it’s been extremely challenging, but the cows and calves just love it. We’ve given ourselves 3 years to break-even and 18 months in, we are already seeing some daylight.  It’s been a steep learning curve and we’ve had to learn a lot of things as we go along, but the benefits are clear.

“Our cows are living around twice as long as those on an intensive dairy farm and our calves are growing almost twice as quickly as typical dairy calves.  At the same time our reliance on inputs, such as cereals and chemicals, has reduced substantially and we’ve increased the net amount of food in our global food system by around 80%.”

While the Finlay’s are the largest farm in the UK to adopt this approach (and the only one in Scotland) they are by no means on their own.  Last month a new website www.cowcalfdairies.co.uk was launched which lists another seven farms who have adopted the same approach.  It’s a supportive network of pioneering farms which between them produce a diverse mix of Cow with Calf dairy products.

Artisan cheese is the product the Finlay’s have chosen to focus on and their new The Ethical Dairy cheese brand is being launched this month through independent retailers, specialist cheese outlets and direct through their own website.

The opportunity to help establish a new range of artisan cheeses has captured in the interest of award winning cheesemaker Stephen Palmer who joined the business last month from the Isle of Mull.  Stephen specialises in unpasteurised and blue cheese and cheesemaking is in his genes, with Stephen’s uncle Ernie Wagstaff one of only a handful of cheesemakers ever entrusted to produce Colston Bassett’s famed Shropshire Blue.   Stephen said:

“It is very exciting to be tasked with the job of creating new cheeses from the exceptional milk produced here.  David and Wilma are true pioneers in the dairy industry and I’m looking forward to working with them to create world class cheeses that are as delicious as they are ethically sound.”

For David Finlay the launch of The Ethical Dairy is only the start of the journey, not the end.  His goal is to ‘revolutionise the dairy industry’ by persuading other farmers of the benefits of this new system.  He said:

“We’ve given ourselves three years to get things to the point where another farmer could visit us and say ‘I could do that’. We also need to get independent professional organisations to study the model and give it their seal of approval and we need to finance the project - we are tenant farmers and banks get very nervous about risky experiments!

“If all goes to plan we hope to demonstrate that food from the dairy industry can be produced with compassion for our animals, for our people and for our environment. We also hope to show that far from being expensive, food produced this way can actually cost us less.  This is just the beginning.”